In 1984, while working as a Sous Chef at the Gold Coast Hotel, Bob started training at United Studios in Las Vegas. Three years later, Bob received his Honorary Black Belt from his instructor and mentor Arthur Iudice. After Arthur’s untimely death in June of the same year, Bob stepped into the role of Chief Instructor. He managed United Studios locations in Las Vegas, Nevada and Sandy, Utah for the next five years.

In 1991, Bob pursued an opportunity as Banquet Chef at the then Flamingo Hilton Hotel. In 1998, he founded a recycling company that serviced numerous Las Vegas Resorts. During his time in Banquets and as CEO, he found himself implementing many of the lessons the martial arts taught him.

Bob attributes much of his success in his endeavors directly to the goal setting, tenacity, discipline and honor he learned at USSD. While professionally he was doing something else, he continued his training under Master Richard Black and Master Tony Barajas.

Bob sold his recycling company in 2008 to open USSD Las Vegas West. Bob is a very goal oriented individual and his primary goal is to make an impact in the world. He is doing this by sharing his love of the Martial Arts, with the hope that his students will benefit as he did. As soon as you step foot in his dojo, Bob’s charisma and dedication is evident. He is always either teaching class or going above and beyond for his students and their families. He has a sincere joy for what he does and because of this joy, Bob is sure to achieve his goals for his students.

At the age of 17 he was preparing himself for the military, for personnel reasons however, he could not join. Sad as we he was, he was given an opportunity by his instructor to start teaching Martial Arts, unknowingly what he was getting himself into, after being asked to become an instructor, his life immediately took off to a whole new path.
Several years later he was asked to participate in the 90-Day Wonder program which was to train and delegate first rate instructors from the Instructors Academy, everybody wondered who would survive the program. And since that time he has had a vigorous journey which now has led him to the USSD Las Vegas school under Sensei Bob Diamant 4th Degree Black belt, and continues his journey to share magic of the martial arts with as many people as humanly possible. 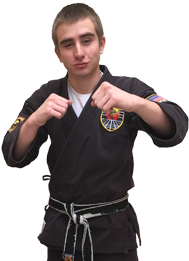 Sensei Jason began kempo karate when he was 10 years old. What began as a hobby quickly turned into a passionate lifestyle. While sensei jason was progressing through the ranks, he discovered a part of himself that wasn’t just enthusiastic about training; but even more invigorated by teaching.

At the age of 13 he successfully graduated the Academy of Professional Martial Arts Insructors under the guidance of Master Tony Brajas and Sensei Robert Diamant , earning the title of junior instructor by 14. A journey through United Studios as both a student and a teacher , educating pee wees to adults; Sensei Jason’s youthfulness and charm make any lesson with him unique and action packed. At the united studios headquarters Sensei Jason tested for the rank of Shodan 1st degree a day before his 17th birthday. “It is the best birthday present one could ever receive.” A year later sensei Jason earned the rank of Nidan 2nd degree by the age of 18. 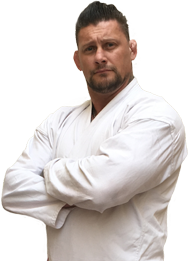 Dave’s martial arts carrier reads like the poster child for being in the right place at the right time. Once you get to know Dave you will see his love for the martial arts and teaching. In 1985 he started his training with Richard Lamoureaux in the arts of Jeet Kune do, kickboxing and Pilipino Weapons. He achieved his black belt and worked as a certified instructor until 1996, when he discovered the J-Sect Academy. With John Lewes’s charisma, knowledge and intense coaching methods, Dave found the place to fulfill his MMA aspirations. This gym added Brazilin Jujitsu, Mau Thai and Judo to his teaching. During his time at J-Sect Academy Dave thought classes for all age groups and worked as a training partner with some of the MMA greats.

In 2013 Dave started working with a few United Studios instructors to help them prepare for their MMA carriers. Dave said the thing that impressed him most about the USSD guys was the diversity in their training and the openness and ability to adapt their art to his routines. This is what led him to his latest goal, achieving a black belt in the art of Shaolin Kempo Karate. Dave is currently a full time instructor and Student gaining knowledge in the art of Shaolin Kempo Karate.